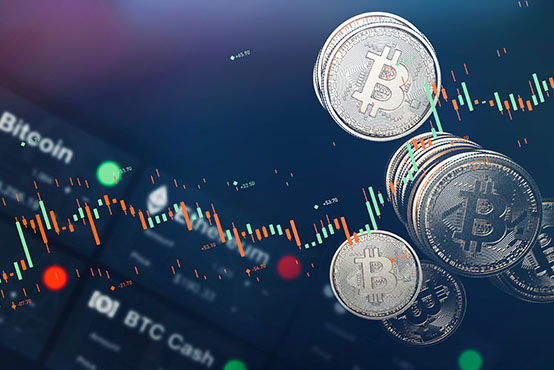 There’s perhaps nothing easy about cryptocurrencies other, perhaps, than trying to ignore them since the inception of the world’s first ‘crypto’ Bitcoin, which was released in 2009. Yet even this has become increasingly difficult with attention grabbing headlines like  “Bitcoin crash wipes out nearly all gains”  and “Crypto Market Tops £2tn”    splashed across the City pages, as digital currencies have fought hard to earn their place in the mainstream over the last couple of years.

These disruptive decentralised currencies are gaining ground with more and more ways to actually use cryptocurrency, and even serious interest from Governments about how to use it within economic systems of the future.  So maybe now is the time to finally get to grips with crypto – what is it and why do investors need to know about it?

Take a look at our run-down of the best management apps out there.

To most lay observers who are merely scratching the surface of cryptocurrency they can seem incredibly contradictory, being simultaneously simple and complex.
Simple because a crypto ‘coin’ is basically a piece of code. This code can be spent in the same way any other currency is spent by transferring it from one entity to another, but (unlike other currencies) this transfer takes place by asking a global network of computers to verify and log that the transaction has taken place.

By comparison a traditional currency transaction, such as when you pay at a supermarket with a credit card, relies on a chain of communication between corporate-controlled and run systems: Merchant to Acquirer, Acquirer to credit card network, credit card network to card issuer (and then in reverse to fulfil the payment).

Acquirers, credit card networks and card issuers are all financial institutions, such as banks. In this traditional system they control and hold all the information, and thus all the power to make the payment happen.

Here’s where the seemingly simple starts to become more complex. The global network of computers are not sitting in server farm warehouses like those owned by the banks and financial institutions. Instead they are owned and run by private individuals. In theory you could connect the computer on which you are currently reading this article, onto a cryptocurrency global network.  You don’t need permission from anyone, and no one has the authority to prevent you from doing so. Technically all you need is a powerful desktop computer and a few cooling fans to make sure the whole thing doesn’t overheat with the efforts required. When this all started ten or so years ago this would have been sufficient to make you a part of the network. Nowadays if you want to be a serious contender on the cryptocurrency global network you need a special type of computer with enough processing might, and somewhere secure and environmentally optimised to ensure it can work as fast as possible, as efficiently as possible. Let’s come back to this in a minute.

Being part of this network is a commercial opportunity since you can earn money from it either by being a ‘node’ or a ‘miner’ (or both).

Nodes verify that the ‘purchaser’ has the ‘money’ needed to make the purchase. Miners then validate the transfer of ‘money’ from purchaser to seller by recording that it has happened.

And here’s where it gets even more complicated. Nodes and Miners both rely on Blockchain. Blockchain is so called because it is simply blocks of information chained together. Information in the Blockchain can never be altered or deleted once it exists. The ‘chain’ of ‘blocks’ just continues to grow. Perhaps the best way to imagine it is if you took a brand new five pound note and every time that note was used to buy something the purchaser would have to write a record of the transaction on the note. So if you were the tenth person to own the five pound note you’d be able to read off the note a list of all the times the £5 had been used, when, and where.

Obviously you’d very quickly run out of room on a £5 note to record this information, but blockchain is a digital record and has no such limitations.

The Blockchain behind Bitcoin is a de facto list of every time each of the coins in existence (currently somewhere in the region of 18million, with a reported limit of 21million ultimately available) are used.

This is where we come back to all those specialised computers working away 24/7/365 in environmentally controlled, maximum security rooms.  These computers which are ‘mining’ are doing two things. First they are recording the transactions which they then bundle into blocks. A typical block is made up of the validation of several thousand transactions. Secondly they are completing each block by proving they are real, by including in the block of data a verification code. And this is where it gets a bit trippy. The verification code is not as simple as something like a pin which is only four digits and remains the same every time you use it. Instead, the verification code is 16 digits, a complete unknown and changes every time a block needs to be created. So the computers working hard to build these blocks basically have to guess what the 16 digit code is before a block is finished and can be accepted to be part of the blockchain. Luckily computers are much better at guessing games like this because they can spit out more numbers more quickly. But it means the competition is on between every computer in the network to be the first to guess the code correctly. If they can do this, and they are allowed to add a block to the chain, then they are rewarded with newly created cryptocurrency.

Cryptocurrency can only be created in this way, and no government can control it.

The result of all of this is that the financial institution part of any financial transaction is bypassed, so that money is owned and run by ‘the people’ so ‘the people’ have the control, the information, and thus the power.

The pandemic has proven to be a breeding ground for online scammers, and they just aren’t going away.  Read this to find out how you can stay safe.

Where do you keep your Crypto?

As you might expect crypto money can be kept in a crypto wallet.

The second kind is a non-custodial wallet, which is similar to a hosted wallet except this is more like handing your purse, rather than just your cash, to someone else to look after for you. The advantage of this is that if you want to use your money it is easy to do so – just tell them which one is your purse and ask them to take the crypto out. The disadvantages of this are that you need to remember your access details (there’s no other way to prove it’s yours otherwise) and it is also open to being stolen if someone hacks into it.

The third type is a hardware wallet. Think of this like a thumb drive which you ‘download’ your cryptocurrency on to. Then it is safe from hackers, but you need to find somewhere safe and secure to store the thumb drive – some people put them in a bank vault. It also means you can’t easily use your crypto currency, but this won’t matter if you intend to hold on to it for a long period of time.

What are Cryptocurrencies worth?

The good old days of biting a gold coin to verify it was made of actual gold are long gone, and we are all comfortable with the idea that any pound coin we have in our pocket is made of nickel and brass, and which probably doesn’t equate in value to one pound sterling. If we apply this same logic across to cryptocurrencies it is easier to understand that one bitcoin, for example, is worth just over $47,000 (at the time of writing) even though it is literally made of digital data.

The actual value of a cryptocurrency, like many things today, is driven by supply and demand. Popular demand will dictate the fluctuations of value of crypto coins traded on specialist crytpo exchanges, such as Coinbase. And the supply is kept in check by the difficulty of mining new coins and ultimately the finite availability.

Most of the crazy headlines you might have seen over the last couple of years have been borne out of enormous movements in cryptocurrency markets.  A lucky few have made millions by owning and trading cryptocurrencies, but many, many more are still trying. The industry has its detractors who will say that since the intrinsic value of a cryptocurrency doesn’t actually exist, therefore it has no actual value. Supporters will say it is no different to other types of speculative investment, so there is a value simply in the possibility of making money.

There are various forms of cryptocurrency but they are not all equal, in fact some have been revealed to be fraudulent. The biggest names in cryptocurrency are the original Bitcoin (BTC) and so-called ‘altcoins’ Ethereum (ETH), and Litecoin (LTC). Besides this there are over 4500 altcoin currencies in circulation, and although most have an almost inconsequentially low trading volume, some still have extremely dedicated and loyal followings.

If you’re considering taking a walk on the wild side by actually investing in some of these then you need to get familiar with the key trading platforms.  We’ve mentioned Coinbase already, but you can also create a portfolio and trade on sites such as Binance or Gemini. These sites provide some good learning tools to find out more about cryptocurrencies before taking the plunge, and most importantly allow you to track past performance – which is useful if only to demonstrate the volatility of the market. These platforms operate in similar ways to other online trading platforms so the format and practical processes of trading look and feel familiar. Plus there are a bunch of other familiar elements which might not be so immediately welcomed, such as taxes and fees, that you’ll need to get to grips with. In the UK gains on cryptocurrency investment are dealt with as capital gains, and trading fees can vary depending on the platform and your type of account. The key thing to remember is that you need to make sure you understand all of these other costs before you start counting the potential returns. It goes without saying, of course, that investing in cryptocurrencies can be a precarious business. It’s a new world and there are no guarantees. So tread with caution and always view any investing you do as part of your overall portfolio which should be geared towards your personal risk profile.

If your head hasn’t exploded after this crash course in cryptocurrencies, and you want to know more, some great places to start are Investopedia which has some excellent articles and a financial education centre, and The Block, which provides a really good, live, global view of what’s going on in the market. Plus, as you’d expect of something this new, social media is also a great place to hang out for live commentary on the market and to get to know influential cryptocurrency commentators. Check out @VitalikButerin and @ErikVoorhees for starters, and see who else you come across.

Are you a keen investor? Take a look at our guide to investing in a post-pandemic world.