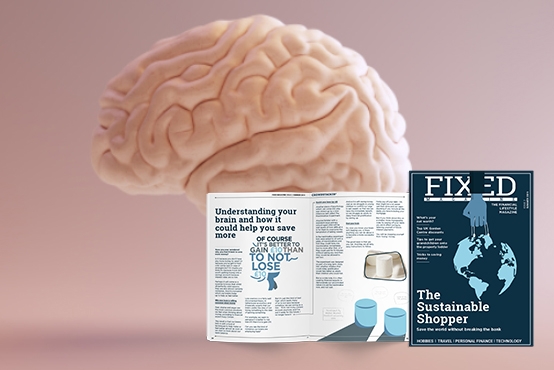 Have you ever wondered why you find it hard to save more money?

Is it because you don’t have any more money to save?  Or because you’ve got to hold onto some cash in case of emergencies?  Or maybe you think it’s because it just isn’t worth putting money into a savings account because interest rates are so low.

Perhaps it will come as a surprise to know that whilst all perfectly valid reasons, they are also almost certainly nonsense.  And it’s nonsense which our brains make up to help us feel better.

Ever thought of making money out of debt?  Find out how here.

Why your brain is talking nonsense about money

Fear, shame and anger are the most common emotions we feel when thinking about money according to financial expert Suzy Orman.  The result being that our brains kick in with a host of techniques to help make us feel better almost as soon as we start to think about our bank balance.

Loss aversion is a fairly well documented theory in behavioural economics, and it basically asserts that our brains prefer the idea of not losing something to the idea of gaining something.  For example, we seem to perceive it is better to not lose £10, than it is to gain £10.

Can you see the kind of nonsense our brains are employing here?

Of course it’s better to gain £10 than it is to lose £10.  But it’s just this kind of bad logic which leads many of us to not save, because somehow we see saving as a loss - “If it’s not in my current account any more, and I’ve put it aside for the future, I no longer have it.”

Another piece of psychology which can come into play was shown up by a now infamous test called The Marshmallow Experiment.

Anyone familiar with a standard issue primary school-aged child will be well aware how difficult it is for them to overcome the temptation of eating sweets.  In the marshmallow experiment kids were asked to sit with a plate of marshmallows and told they could have one marshmallow immediately but no more after that, or if they could wait for 15 minutes without eating any and then they would be allowed to eat two.

The experiment was designed as part of a long term study into whether children that could delay gratification would fare better as adults than children who could not.  But as a side note it is often used by financial experts to demonstrate our uncontrolled nature is to eat the marshmallow now, and not wait.

And so it is with saving money.  Just as we struggle as young children to control our urge to eat sweets so that we can have the immediate benefit, so we struggle as adults to delay financial gratification by saving up.

Every heard of the 10% rule?  It can be the key to successful investing and saving.

So, now you know your brain isn’t helping you, is there anything you can do about it to become a more successful saver?

The good news is that yes you can.  And they are all fairly easy instructions to follow.

Firstly pay off your debt - OK, that might be a lot easier said than done, and can seem daunting if you include all the debts you have including your mortgage.  But if you think about this on a smaller, more manageable scale, by paying off your debts you are in effect saving by relieving yourself of future interest payments.  You will be stopping yourself from ‘losing’ money.

Maybe you have credit card or store card debt, or maybe you’ve bought something on interest free credit, either way put in place a plan to pay these off at a pace you can afford.  Even if you can’t erode the entire debt by the time the interest-free period expires, or the credit/store card debt by the end of each month, anything you can pay off will stop you losing at least some money on interest.

Look after the pennies – if you’ve ever had one of those clay piggy banks which has a slot to put money in but no way of getting the money out without breaking the bank, then you’ll know how you can save surprising amounts of cash by just putting the pennies aside.

And as with most of the adages you’ll have heard growing up, the idea of ‘looking after the pennies and the pounds will look after themselves’ has a strong ring of truth about it.

Most people aren’t multi-millionaires, and most people have monthly incomes that are nominally spent (on the mortgage, on bills etc) before they’ve even hit out bank accounts.  But make small sacrifices when you can and put the money aside.  Don’t lose that £2.50 on a shop-bought coffee, chances are it will taste horrible anyway. Instead make a coffee at home and put the money into your ‘piggy bank’.  It’s still there, you haven’t lost it.  Put something small in each time you can and it will all add up quicker than you think.

Short term goals – try not to overwhelm yourself with grandiose long term goals.

Saying you’re going to save enough so you can afford that trip of a lifetime can seem as insurmountable as getting fit enough to run a marathon.  So adopt the same techniques used to get people off the sofa and out pounding the pavement, to get your savings off the start-line.

Set up a series of shorter term goals which can be achieved more quickly and therefore ensure you get lots of positive vibes which will help you to carry on.

For example, break the cost of the trip of a lifetime into smaller chunks – the flights, the meals, the hotel, the spending money.  And then try to hit these more achievable milestones that get you on your way to your overall savings goal.

Once you’ve saved enough for the first milestone you’ll get a hugely positive emotional kick out of this which will inspire you and spur you on to the next goal.

And remember, money in your savings account(s) is not lost. It’s still there, and it’s still all yours.

If you’re interested in finding out more about saving and investing check out our new magazine ‘Fixed’ which has loads of tips and hints about how to save cash.